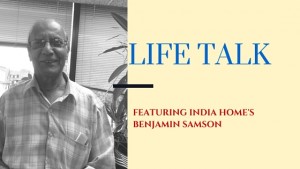 In this regular feature we interview our seniors for insights into the life they’ve lived. This month we talked to Mr. Benjamin Samson.

Benjamin Samson, 72,  likes to make people laugh.  A Jewish member of India Home’s center at Queens Community House at Kew Gardens, Benjamin likes to tease people and crack jokes.  He was born in Mumbai, India, and came to New York after living for 18 years in Israel. India Home chatted with him about his adventurous life, it’s unexpected twists and turns, and his many avatars–as army man, railway man, and occasional repairman.

On being in the Israeli army in the 1970’s:  In the Israeli Army my job was to fix the tanks and the airplanes. The tanks would go in front and we would follow behind them. If there was something that broke down then I would get the parts and fix it. One time, I remember there were bushes on the side of the road. They were moving. There were enemy fighters hiding in them, shooting at us. But the aircraft would land and we would have to find the parts and fix them, no matter what.

On striving: When I got to America there was an exam I needed to take. When I got there I realized I had missed it – I was late.  But I went up to the them and said, I missed the exam, but can I still take it?  And they said yes, okay.  I took it and I passed. I got a job as a technician with the MTA. Fixing the trains. I worked for Metro North. It was dangerous work because you had to be on the tracks.  I would work at night, come home and sleep, then go right back. I worked a lot of overtime. I wanted to work and they paid well, very well.

On being retired: I like to repair things. Radios, computers, electronic things. People bring their broken down things to my house and I repair them. I don’t charge them–it’s more like a hobby. Whenever I go to repair radios, I don’t take money. But you know how Indians are. Their wives will say, “You have to eat something, Mr. Samson. I’m not going to let you go without eating.” That kind of Indian hospitality you won’t find anywhere else.  My son bought a flat and there were so many thing that needed to be fixed. So I went over and fixed the door knobs, the flush. I like all that engineering stuff. 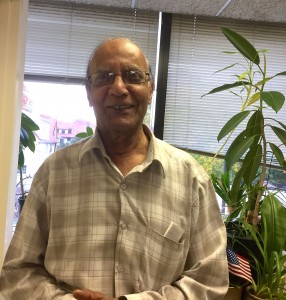 “When I was in the Israeli Army my job was to fix the tanks and  airplanes. The tanks would go in front and we would follow behind them. If there was something that broke down then I would get the parts and fix it. One time, I remember there were bushes on the side of the road. They were moving. There were enemy fighters hiding in them, shooting at us.”

A favorite memory of his life in America: I was working for security at LaGuardia airport. When the bags were going through the machine I saw that a man was carrying a knife in his bag. It was a big knife. I told my supervisor-stop the machine. She didn’t listen so I stopped the machine. She said, Why did you stop the machine? I said look, There’s a knife. She said, No, there’s no knife. That’s not a knife. I said there is a knife. Explosives look green. A knife looks green. She said, go inside and don’t do anything. I came out and said, no you have to check- this guy is taking a knife on board. Then she opened the bag and she found the knife. Then she said, how did you know? I’m a supervisor and I didn’t know. I said, in Israel, they have very good security–because they have a lot of experience of terrorists. After 9/11 I met my supervisor on the platform — I was working for the MTA.  She said. “You are a very good person.” I have got experience, I’m Indian but I lived in Israel 18 years.  My brothers are still there. I travel there all the time.