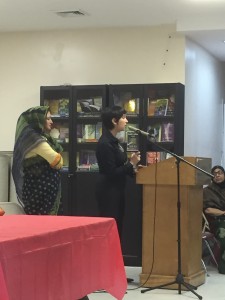 Commissioner Agarwal spoke about new initiatives from the Mayor’s Office of Immigrant Affairs that would help immigrant seniors.  She said many immigrant seniors don’t apply for citizenship because of cost, or difficulty with the qualifying exam. She said that many don’t understand that under certain circumstances, especially for older Individuals, the strict requirements are often waived.  She offered to send representatives to Desi Senior Center to help our seniors better understand not only the citizenship process, but also their legal rights.

Councilman Rory Lancman and the Consul General for Bangladesh, Shameem Ashan spoke very highly of the services offered by India Home.  Councilman Lancman, said that he was “enormously proud” of this program,” and the fact that our members come to the center “even in the rain,” and that they consider it their “second home.”