About 65 years ago, the young people of Bangladesh rose up to demand that Bangla be one of the official languages of, what was then, East Pakistan. Students marched in the streets, peacefully protesting for the right to their own language. On February 21, 1952, in an incident that would change the course of the protests, the police shot dead marching students from Dhaka University, Jagannath University, and Dhaka Medical College. 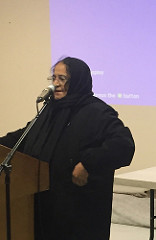 Many of the members of India Home’s Desi Senior Center, which serves a large majority  of Bangladeshi seniors, experienced these revolutionary events first hand.

Since 2000, International Mother Language Day has been observed all over the world to commemorate the sacrifice of the students, honor the lives that were lost and celebrate linguistic and cultural diversity. 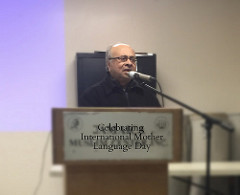 Songs and poems of protest

Our members watched a documentary film about the protests. Following the documentary, Putul Chanda, our beloved member spoke of her first hand experiences. She explained how the police would try to disrupt the peaceful protests of students. Another member of our senior center performed the poems and chants that student protesters used at the time. This was a day to renew memories and feel once again the honor and dignity of having fought for one’s rights. There were cheers from our members when the slogans and poems ended–one could feel the pride in the room!