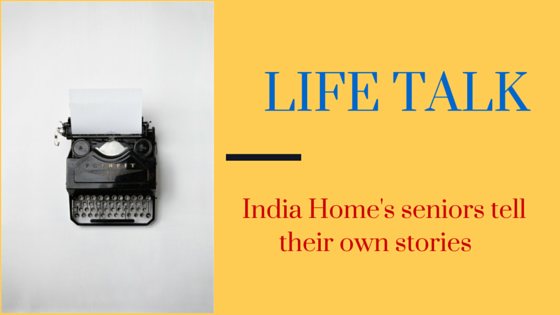 Shireen Mansoor was born in 1949 in Bogra village in, what was then, undivided Pakistan. Sheikh Mujibur Rahman, the founding leader  of Bangladesh and its first President, was a cousin. Perhaps that’ is why the revolutionary spirit burned bright in her. From a young age she broke with tradition, went to college and became one of the few women in the country with a medical degree. Hardly 22 years old at the time of the Bangladesh War of Independence, Dr. Mansoor secretly smuggled herself into Assam’s refugee camps to help her country and the Bangladesh Revolutionary Party. This is her story in her own words.

I was born in Bogra. My father was a business man in Dhaka and my mother lived with him away in the city. We were 9 sisters and my grandfather, a retired lawyer, was taking care of us. He said to my father, “No matter what the sex of the children they need an education. Let them stay here..Bogra is a quiet place.”

I was bored at home and so my grandfather asked my father to put me in the POD Girls School. It was a dorm school (boarding). He said, “There’ll be a library, she will have companions.” I was eight years old when i joined the 5th grade.

All the other girls were bigger than me and one of them came and asked me, “You are so little what are you doing here.”

When my father was about to leave I said, ” I said let me sleep in your lap. When I’m asleep you can put me to bed and you can go.”

My dad used to send money to the post office and the school clerk would handle my finances. Sometimes he’d say, the teachers haven’t been paid so can I give them some money and I’d say please go ahead. When they got paid, he’d return the money.

I would buy breakfast for my school friends. I would tell the peon, “Today I want four parathas with bundiya and rasogulla.” He’d say, “Why four?” I wanted to give my friends breakfast because my breakfast came from outside and they didn’t like the school breakfast. 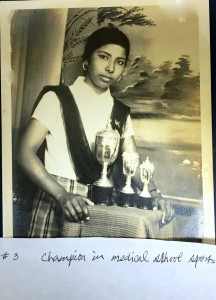 Shireen was a champion in Medical School sports

I went to college and I got admission into medical school. I was selected on merit. The medical school was set up by the World Health Organization and it was in the Rajshahi district, close to India. It was a wonderful school, newly built. Very big campus. There was the medical school, hospital, hostels for teachers and students, playgrounds. It was beautiful.

We were 100 students in the medical school. Out of the 90 students from home country, I was one of 10 female students. One time we had to do anatomy and thanks god I was one of the first to get to do it. I got to dissect the abdomen. It is a big part of the body and has a lot of organs intestine, spleen and so on. The Grey’s Anatomy was our book – it was so heavy we had to carry it on our shoulder. I had a study partner; she didn’t know good English and I always helped her to study. So she was always carrying my books, like my secretary. She was very good. I love her.

Called to help in the Bangladesh War of Independence

In 1971 the college informed the international students that there was going to be political unrest and asked them to go home. They told us that the ambulance would drop every girl from the hospital at home. So they dropped me home. My parents were worried about the unrest. Then on the 27th of March the war started and the army started marching from Dhaka to all the districts. My parents decided it wasn’t safe to stay in the city,  so we moved to the village. On the 28th of March, we went to the village. I was a third year student. 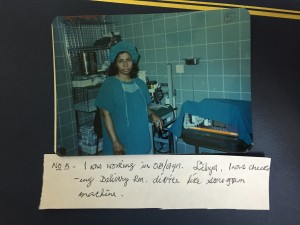 Working in the delivery room in the OBGyn ward in Libya

One afternoon I was standing on my balcony. I saw a young boy was coming through the gates. When he came closer I  realized he was my cousin. He was dressed like a soldier. He brought a letter from my uncle, asking me to go with him to the refugee camp in Assam, India set up by the officers of the Revolutionary Party. There were a lot of women refugees with gynecological problems, urinary tract infection and so on. The Red Cross was helping but there were no female doctors.My father said, “Yes, definitely this is your time to go and help.

“My mother started crying. “If she goes to the war front no one will marry her. No one will take her in marriage. People will talk.”

But my father said, “She definitely needs to go because she’s needed there.”

Hiding in the forest from Pakistani fighter jets

This happened at about 2:00 o’clock in the afternoon and I had to leave at 6:00 because they had hired a big boat with a motor. There were 100 people on the boat, including my relatives and some political persons. It had two floors like a steamer. They gave me a lot of honor. I had a corner on the boat with a curtain. In the daytime they moved very fast down the Brahmaputra river and at night they would hide. The Pakistani fighter planes were flying overhead all the time. It took three days; it’s a long distance from Bangladesh to Assam.

One time the boat was anchored and the Pakistani planes were overhead, they were looking to drop bombs. So all the political people on the boat said everyone get off the boat slowly and crawl into the forest. They asked us to scatter, to not go in groups. So my cousin and me got off the boat. It was a very terrible feeling.  But on the other hand I did it for my country. My cousin held my hand and we crawl crawl crawl and we waited for two three hours in the forest. Then the plane went away and we went back to the boat and continued. This is one memory that stays with me even today.

Working in the refugee camps 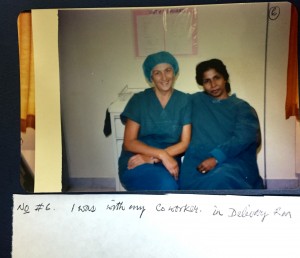 With a co-worker in the OB-Gyn

The refugee camps were filled with refugees who had run away from Bangladesh to survive. There were building like a school or a police station, there were offices for the red cross. The camp officials were very happy to see me and they took me to meet the women. The women had problems with the language so they couldn’t tell anyone what was going on. There were like half a million refugees there. Many women were from good families. There was no water for washing.  There was bread in plastic bags, but it wasn’t enough. Many were going hungry. There was canned milk, canned vegetables from abroad. They washed in the river. So I worked there and that’s how it went until December 16. Then knew the country was independent! Oh happy days.

When I went back home and had to go back to medical school. There were dead bodies on both sides of the road, collected there in huge numbers. It was nine months after they had been killed and all the flesh had disappeared.

The ambulance came to take us back and on the way there–oh my god –I saw the land was covered in bones.

Marriage and becoming an OB-Gyn in Libya 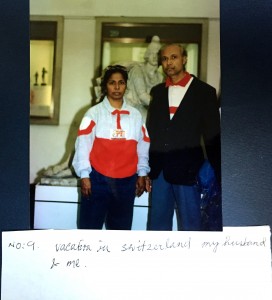 Husband and wife on holiday in Switzerland

I did an internship after graduation then I came back to Dhaka and started working in the OBGyn ward. My mother was crushing her head that I should get married. Then at the age of 26 I got married and moved to Libya. My husband was an eye specialist. Libya was beautiful, like a Mediterranean, European country. It had been developed along the curve of the Mediterranean ocean. The weather was not too hot, not too cold. I worked there with Italian, German and Indian doctors. I worked in Libya for 16 years, my children were born there and were going to British schools.  Finally I resigned and followed my husband to Switzerland, then New York in 1994. 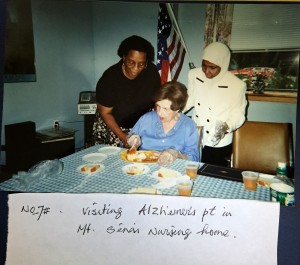 In America it was hard. I had to study, I had foreign student status. I was older, my children were in school. It was very difficult to get residency. I finally started working with a Pakistani doctor who had 4-5 offices. She realized I had done everything possible to work here. I was working with her and she got me immigration, good salary and I survived. My children were still studying when my husband had a stroke and became bedridden. I started supporting the house. Just like my parents took care of me, I took care of my family. What to do? You do it for the children.  I worked with the Pakistani doctor for ten years. I stopped working in 2014. It was not easy but I survived.

Proud of her children

I have two daughters and a son. My daughter is a doctor, she’s waiting for her residency. Second one was doing a Ph.D. at Columbia and then she got three scholarships to UPenn, so she moved there. My son got scholarships from Cornell.

It keeps us busy and in flow with the world. There’s wonderful feedback here for body and mind.

I had come to the mosque upstairs for prayer and then someone asked me to come to Desi Senior Center because she said, “They have physical exercise.” I came for the physical exercise because I have to take care of myself keep myself fit. When she saw me Nargis (Nargis Ahmed, the Program Coordinator) said, ” Oh my God! Dr. Mansoor, I was your patient!” Here I’m learning about senior citizens health issues, how to take vitamins, fight osteoporosis. I gave some health lectures here on how to protect from the cold, how to take vitamins. It’s a wonderful place for senior citizens. If they are sitting at home, they sleep. It is better that they stay active here. We get one hour exercise everyday and we communicate with each other.