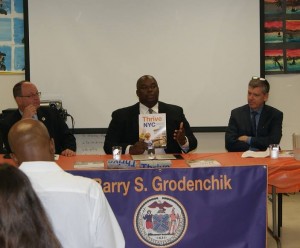 Dr. Kalasapudi, India Home’s ED, was in a panel with Councilman Barry Grodenchik and Deputy Mayor Richard Beury at the ThriveNYC Forum in Little Neck.

It is a well known fact that among South Asians and other Asian American groups mental health issues are regarded as taboo. “Emotional problems” like depression, bi-polar disorder, debilitating anxiety and so on are seen as embarrassing and go underreported, undiagnosed and untreated. Yet, 40% of Asian American elders report symptoms of depression that range from mild to severe. Suicide is the 10th leading cause of death among Asian Americans. For Asian women 65+, the suicide rate is double the rate of suicide among white, non-Hispanics.

On September 20, 2016, Dr. Vasundhara Kalasapudi, India Home’s Executive Director discussed these issues as part of a forum organized on the ThriveNYC program by Deputy Mayor Richard Buery, Mental Health Commissioner Gary Belkin and Councilman Barry Grodenchik (D-Oakland Gardens). The forum was hosted by Samuel Field Y at Little Neck. A geriatric psychiatrist herself, Dr. Kalasapudi brought her expertise to talk about how community organizations like India Home can help support the nearly one in five New Yorkers with mental health issues. Dr. Kalasapudi offered insights from her experience serving the needs of the South Asian community and shared prevalent South Asian expectations about and attitudes toward mental health :

Mental illness in South Asian communities is a growing problem and requires urgent attention to prevent calamities like the one reported in the New York Times about a postpartum depressed Bangladeshi mother last year. A significant portion of the South Asian community, particularly those living below poverty line, are vulnerable and tend to have higher burden of mental health problems due to cultural and language barriers. I hope Thrive NYC will focus on developing a special campaign addressing South Asian mental health needs by organizing community events and by funding South Asian community groups and health care providers to provide culturally and linguistically appropriate mental health services.

ThriveNYC is a health plan which will train 250,000 employees to bring about a change in the way mental illness is viewed. The initiative aims to transform mental issues into a problem that New Yorkers can easily seek help for – without shame – just as they would for a broken arm. Some aspects of the ThriveNYC program are already in the works. According to Deputy Mayor Buery, operators who can speak different languages have already been hired for a mental health hotline. This is welcome news, because even when Asian Americans and South Asians do seek help, they are often stymied by the lack of access to health care providers who are culturally competent or able to speak to them in their own language. Nevertheless, these hotlines need to be staffed better with operators who can speak a  full array of South Asian languages and dialects. 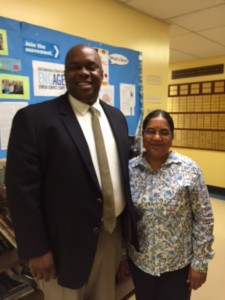