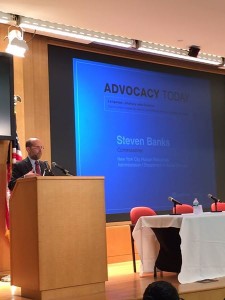 NYC Human Resources Administration Commissioner Steve Banks gives the Keynote Address at Con Edison’s Advocacy Today conference on October 7, 2016. India Home was on the Steering Committee and was a partner at the conference.

On October 7th, ConEdison held the Advocacy Today: Language, Literacy and Culture conference. India Home was invited to be on the Steering Committee and was one of Con Edison’s partners, along with Department for the Aging (DFTA), Live On NY, and New York City’s Human Resources Administration (HRA) among others. The conference aimed to engage, inform and highlight services and resources access available to low-to-moderate Income and immigrant New Yorkers. India Home provided valuable inputs on engaging with immigrant seniors. In his keynote address, the NYC HRA Commissioner Steve Banks discussed how his department was working with other agencies and community partners to provide services for low-to-moderate income, immigrant New Yorkers, as well as homeless veterans. Caryn Resnick, Deputy Commissioner of DTFA, spoke about the different ways DFTA is working to combat poverty among immigrant seniors in New York.

Nearly 100 participants from various service providers across the city came to attend the conference. As a part of a team building exercise, tables were given various scenarios occurring in immigrant and/or low-income communities to see how they would solve the situations. It was a great venue to network with people who have similar concerns for immigrants and low-income New Yorkers.