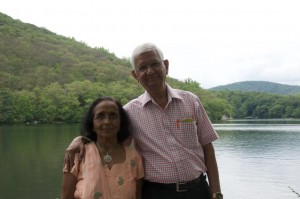 Maganbhai Chavda is tall and thin, a white-haired gentleman who towers over his wife Kamuben’s tiny bird-like figure.  Kamuben,  in turn, is the one you will see dancing the vigorous garba at every opportunity. The husband and wife, both 82, are unmistakable fixtures at India Home’s Sunnyside Community Center location.  They were born in 1935 and have been married for 63 years, sharing a long, eventful life–one that has seen them journeying from abject poverty in a tiny village in Gujarat in India to a life in New York that is filled with success and generosity. The couple spoke to India Home together one afternoon, trading stories, completing each others sentences, refreshing each other’s memory.

Growing up during India’s Independence struggle:

Kamuben says: “I was 13 years old when India became free and we would stay up night after night because the government said they would announce India’s Independence. Finally, we were told that India was free. All the kids ran out into the street cheering. We had steel plates and we began banging on them with sticks and shouting –we went around the city in a big parade.” Her husband, Maganbhai, has his own memories, although less dramatic: “I remember that there was a building in my village that was built after Mahatma Gandhi-ji visited in 1932. He came through our village on his way to the Salt March in 1932. We children would talk about him all the time.”

“Every day was a crisis of poverty.”

Maganbhai’s parents were field hands. They were illiterate and worked the land, doing hard physical labor. “We children could only eat if our parents worked with their bodies,” he explains.  As a result of his family’s difficulties his education suffered. ” When I was in the 7th grade I left school. I was an excellent student, first class first, but I had to get a job because we had no money. I couldn’t afford to go to college or pay the boarding fees to stay in town. I became a teacher  and worked for two years. I didn’t like being a teacher, so I joined the postal service in the village. I had six people working for me. I stayed on in that job for 30 years, and only left it to come to the United States.

Kamuben studied up to SSC in Baroda and then trained as a teacher. After marriage she moved with Maganbhai to his tiny village of Borsad in Gujarat where they started living with his parents and siblings. “I became a teacher and taught primary school from 1-7th grade. I liked teaching the small children in 1st grade. The kids loved me and everyone gave me a lot of respect. Some parents would come to the school and insist that they wanted their child to be in my class.” Kamuben at one point had 14 assistants working under her and she retired as the Principal of the school after teaching for 30 years.

Yet it’s the family that she married into that she reminisces about the most. Her father-in-law was illiterate and a farm worker, but she says, the way she was treated was unusual for the era. “My father-in-law was a gem. When I got married I was very delicate and my father-in-law wouldn’t let me go to get water from the public tap. He would come to help.  There were so many restrictions for women in those days. They were to be veiled, they couldn’t laugh or talk in front of their inlaws or even wear shoes.  My father -in-law said, “Wear your shoes.” He was an enlightened person, his attitude was so modern. He always said, “do something new, leave these outdated, ancient rituals.”  We used to play with my father-in-law, a game with cowrie-shells. He didn’t want us to be veiled — he put an end to all that. People in the village used to laugh at us say mean things. They’d tease my in-laws and say that they were letting me do whatever I wanted because I was educated. After a while, though, following our family’s ideas,  even villagers also changed their attitude towards women.”

“My father died without a good doctor, so I vowed to make my sons into doctors”

Maganbhai and Kamuben are sorrowful when they recall the day his father died. “We had no money to treat him or take him to a hospital in Ahmedabad city. So he died in the village. Maganbhai was changed by his father’s death. “That day I decided I will make at least one son a doctor,” he said said. “Fortunately,  I had three sons and they were all intelligent and they had our support,” he says. Today, not one, but all three of the couple’s sons are medical doctors–one is a radiologist, the others practice ER-Medicine and pulmonary medicine. The couple are justifiably proud of their sons and daughter. “They sent us on a tour of Europe, they sent us to South East Asia,” they said, each one talking over the other in their excitement.

Kamuben’s sister immigrated first to the U.S. and then sponsored the couple. Their children were grown and had done MBA’s in India, but with typical drive and enterprise, they studied further and became doctors. Their only daughter is an accountant. Maganbhai, even after spending his entire career in the post office, decided to continue working in the US and operated a Lotto machine in his brother-in-law’s store. “I started at $3.50 an hour in 1985,” he says. “When I finally listened to my children and stopped working, I was making $7.00 an hour.”

The Goddess of Charity

Kamuben and Maganbhai have been in the US for 30 years. They are comfortably off and their children are doing well. Yet they have never forgotten the days when they weren’t so fortunate. “Everyday was a crisis without enough money,” Kamuben says. Now they sponsor kids who are smart but may not have the means to go to college or  get graduate degrees.  They sent a friend’s young son to London to study. If someone wants money, we give it to them.  “Because we have seen what happens when you have no money, we help anyone who needs it.  We’ve helped so many families, helped their kids come up in the world. Even though I was in the village, I would cook for poor kids who didn’t have anything to eat. I’d feel sad for them.”  Maganbhai teases his wife: ” When we go to India, all our relatives call her the “Goddess of Charity.”

So what’s the secret of their happiness?

The couple is remarkably active even though they are both 82 years old. Maganbhai waves his hand: “Don’t worry, be happy. Worrying too much makes you sick,” he says. Kamuben nods: “We don’t have any illnesses. I say, eat, drink, be happy, help others and don’t be selfish with your money. If you have enough to eat, feed others. Everyday I pray that god gives me the means to help others.”

“We come here, we see our friends, our brother-in-law is here – we have a good time.”