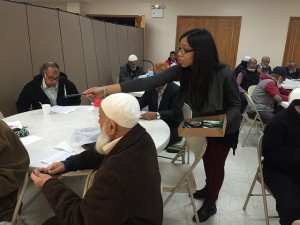 Seniors from India Home joined LiveOnNY, a senior citizen advocacy group, in a campaign to urge Governor Cuomo to leave the funding for seniors in the New York State budget intact. The budget proposed a transfer of $17 million in Title XX Funds funds from senior citizens’ programs to child care initiatives around New York state.

The change, claimed alarmed advocates, would result in putting 65 senior centers in New York at risk of closing and deprive 6,000 older adults of a day at a local senior center.  “The senior center cuts would also equal the disappearance of 1.5 million meals and 24,000 hours of case assistance which help seniors with public benefits, housing concerns and other aid in their own language. Elderly immigrants will also lose a safe haven, where they can trust staff,” wrote Bobbie Sackman of LiveOnNY in an op-ed in NY Slant.

In the end, the pressure from 17,500 letters from 141 senior centers, phone calls and strong, united efforts by senior citizen advocates at City Hall and Albany worked to effect change. Last week, Governor Coumo restored the $17 million in Title XX funds for senior citizen programs to the state budget.