On April 19, 2017, India Home invited its members as well as residents of the Jackson Heights neighborhood in Queens to a movie night at the PS 69Q auditorium. The film that was shown was Bollywood tear-jerker “Neerja,” an award-winning film about the bravery and sacrifice of a young air hostess on board a Pan-Am flight that was hijacked in 1984. Our members enjoyed free samosas and chai before settling in to watch the film. Later, there was avid discussion about the film and the heroism of the young air hostess.

A few early birds waiting for the movie to start

This initiative to extend our programming to the evening, is part of our on-going efforts to combat the social isolation that seniors often endure. This is also a first step in doing more activities in Jackson Heights, an area with a large South Asian community. 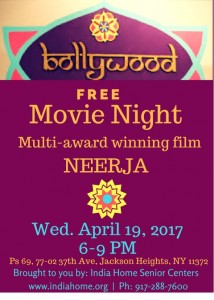