The elders were dressed in fancy saris and kurtas. Their grandchildren played catch in the back of the room and were shushed by their mothers. The aroma of fried snacks was everywhere.

It was the beginning of Ramadan and India Home’s Desi Senior Center hosted a night of poetry, songs, and a meal to celebrate before the elders entered a period of fasting in Jamaica. The venue and dinner were generously donated by Exit Alliance Realty, a well known real estate company in New York. Mr. Azahar Haque and his colleagues were gracious hosts for the entire night.

India Home published an anthology of poetry written by our elders

The elders from the center were also celebrating the completion of a successful writing workshop. We wrote about it here. One by one they went up on stage and recited their poems. Some others, sang songs about their beloved Bangladesh. Some told jokes or spoke on a favorite topic. 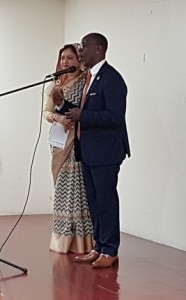 Councilmember I. Daneek Miller was the Guest of Honor and he gave away certificates marking the completion of the Writing Workshop to the elders. He said he was happy to see how well the elders were doing. He also officially released the booklet of elders writings that India Home had printed.

Nargis Ahmed, the Center Director of Desi Senior Center, who had expertly managed the ceremonies then introduced a professional singer who took the stage and sang popular songs late into the night. 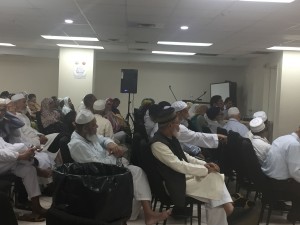 The elders left late after a hearty dinner of favorite Bengali dishes, some carrying their sleeping grandchildren and the book with their poetry. A month of fasting, austerity and prayer lay ahead, but the night’s celebration had been a feast in every way.