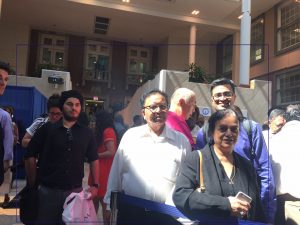 On 18th July, Mayor Bill de Blasio hosted a City Resource Fair at the Queens Borough Hall in order to help residents understand the various services available to them, and untangle problems incurred by the people of the city. The event was very well organized and different departments like NYC Department of Health, Department of Aging, New York Police Department, Fire Department of the City of New York, MTA’s Access a Ride as well as Reduced Fare services, NYC Rent Freeze Programs were represented at the venue. 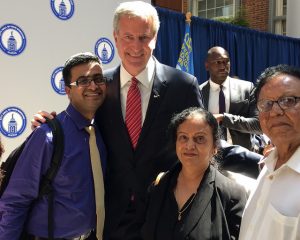 Most of the people who were waiting to meet the Mayor had come in search of a solution to specific issues like health care, transportation, housing and so on.

Several seniors from India Home attended the Resource Fair. Our seniors were very excited as well as honored to be able to meet the Mayor of New York City. The long lines did not deter our seniors, instead, the waiting allowed  our elders more time to come up with other concerns they wished to share with the Mayor. “Since the Mayor has made so much of effort to organize this type of an event for all of us, in turn, we can definitely spare a few minutes standing in the line to meet him,” said Mr. Butala.

In the end, the hassle of waiting in line paid-off as the seniors finally got to meet the Mayor and expressed their problems. Mayor de Blasio immediately helped the seniors find solutions. “He was very friendly and patient in listening to all my problems and further asked Donna Corrado, Commissioner of Department for Aging who in turn helped me with information on care resources for my husband,” said Bharti Parikh. As for Mr. Butala, he brought an important issue to the Mayor’s notice: “I notified the Mayor about the increasing number of accidents near my neighborhood and how badly someone needs to take action for it,” he said.