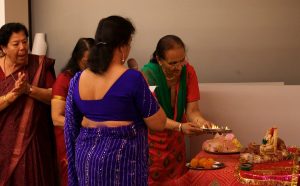 Lord Ganesh, the roly-poly, elephant-headed Hindu God is beloved of devotees not only across India, but also Nepal, Tibet and other Himalayan communities. As part of India Home’s on-going partnership with the Rubin Museum of Himalayan culture in Manhattan, our members, immigrants from India and Nepal presented a program for the Himalayan Heritage unit on their relationship with Ganesh.

The audience was diverse and was made up of people who ran the gamut from those who loved Himalayan culture and had visited India or Nepal several times, to curious folks who had wandered in out of a cold, rainy evening.

What they got were stories: childhood memories of waiting for hours in line to catch a glimpse of the most famous Ganesh statue in all of Bombay; a Nepali myth of Ganesh incarnated as a warrior God who breaks his tusk to throws it at the jeering moon; and surprising accounts of Tantric offerings of meat and whisky from Renu Shreshta, a member of the Newari community of Nepal. 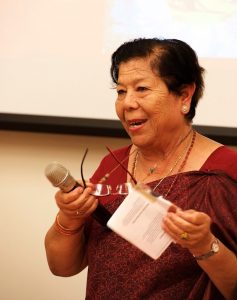 Renu Shreshta, an immigrant elder from the Newari community in Nepal, related myths about Ganesh and her community’s unique rituals that include offerings of meat and whisky. 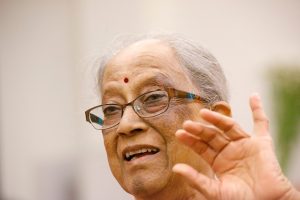 Our elders also enacted the rituals of worship, wether it was the installation of a tiny statue of Ganesh, or the “visarjan” or immersion that is part of the cycle of the celebrations for Ganesh Chaturthi (Ganesh’s Birthday). Meera Venugopal, India Home’s staff explained how the clay body of the God animated by the ardor of worship is returned to nature by being immersed in moving water. Just as our bodies are returned to the elements through death, so too Ganesh is sent off on his journey, only to be welcomed again next year. 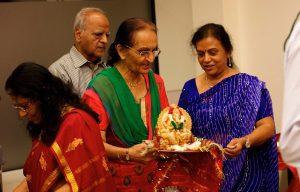 The program ended in true South Asian fashion with feasting–there were samosas, hot tea, and laddoos, beloved sweetmeat of Ganesh. 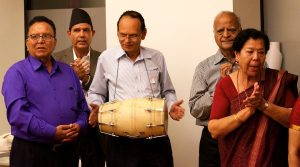 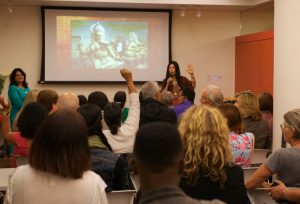 Once again Rubin Museum’s audiences had an opportunity to experience a culture through the authentic medium of stories of lived experience. Our elders were thrilled to share their lives, perform and be seen as active, talented story-tellers and performers.

All photographs are by Jane Stein