Rosa Mendonza is singing. The 86 year old doesn’t speak much English, so she decides to sing instead. Her beautiful, rich voice rises in long trills above the crowd in the bright room and and seems to set the very trees outside the windows quivering. The murmuring crowd falls silent as her voice fills the room.

She stops. Her audience draws a breath, then erupts into cheers. 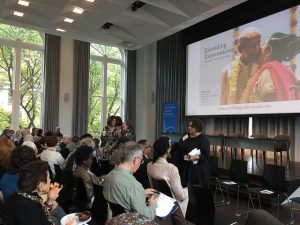 It’s a wondrous moment in a morning filled with revelation and wisdom that came from 18 or so elder New Yorkers who sit on chairs before a crowded audience in the auditorium of Columbia University’s Journalism school.

The audience had been invited by Columbia University’s Robert N. Butler Aging Center  to celebrate the culmination of its Exceeding Expectations project. Started in 2015, by Ruth Finkelstein, a psychologist, and Dorian Block, a journalist, the storytelling project “explores how people find purpose later in life,” through writing, photography and video. The “people” in this case are aging New Yorkers who are disrupting expectations of what it means to grow old.

“The goal was to show the lives of every day people and 20 people in every category of diversity were chosen,” according to Dorian Block.

The elders being honored are certainly reflective of New York city’s diverse population. Among them is India Home’s own 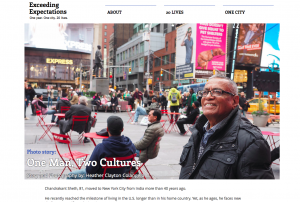 Chandrakant Sheth, an elder who has been a regular at our Sunnyside Center for years. A senior writer and photographer on the project, Heather Clayton Colangelo, shadowed Chandrakant as he went about his everyday life. She followed him to India Home, on his walks around the city, and into his room as he pecked away at his keyboard. She talked to him while he gardened, Skyped with his grandchildren, took art classes or hung out with his friends. “Asking someone to be vulnerable and open their life up to a stranger is not an easy task, but from the beginning Chandrakant was willing to go outside of his comfort zone and share his life and thoughts with me,” Heather said in an interview for this blog in 2016.

Like Heather, other project staff chronicled the every day routines of each of the 19 men and women they followed. 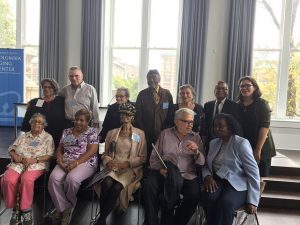 The result is a rich, fascinating glimpse of aging New Yorkers in their later decades–captured through film, photographs and writing. The stories were told in their own voices, in their own language, set in their familiar surroundings.  These chronicles of the everyday are moving and funny, and occasionally tragic.

Dorian Black was clear why she wanted these stories out in the world: “Journalism is how we chronicle our time. Aging is universal-all of us are growing old, but the way journalists do it now is to show aging as either terrible, pitiable and static, or heroic!” Or as Heather put it,  the project wanted to show aging as having “different possibilities beyond the extreme images of frailty and skydiving.”

The goal was to change hearts and minds, to make people see aging in a whole new way and more nuanced manner, as another life stage. The project asks viewers to understand that each of these individuals and their stories are unique.

For instance, there’s Sylvia Lack, an 84 year old New Yorker and lifelong activist, who has traveled to Albany for 40 years to advocate for social justice issues. “Every time I get on that train to Albany, the attendant greets me with “Here comes the No.1 Democrat!”  she recalled to the delight of the crowd.

Not everyone was so voluble. Hank Blum when asked what he would have differently in his life just had only four words, “I wouldn’t have smoked.”

Asked what he thought he had learned from being part of the project, Chandrakant said, “It made me go back over my life, over the sad events and the happy events. Just sitting with these wonderful people enriched my knowledge.” 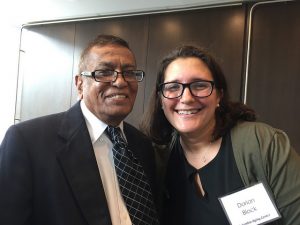 “It also taught me that New York is the best city in the world. You meet so many people from so many places and they have so much to teach us. I think we should all mingle, rather than staying in our own little circles.”

Chandrakant, like so many of the others who’s stories we heard, had never stayed in his own circle. He had ventured far, far from home, having come to New York from India in 1969. For 40 years, he had worked and lived in this city, had moments of struggle and happiness, and created a new life and story for himself.

Now his unique immigrant story will become part of an invaluable record created by one of the world’s great universities and help others understand what it means to grow old in New York. 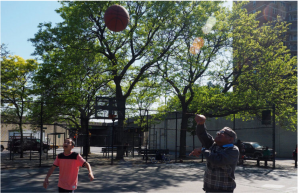