India Home’s programs end around 2:00 pm most days. Even as the Program Staff are winding down, we notice our seniors patiently waiting in the lobby, sometimes as long as 45 minutes. Some of them have canes or walk with difficulty. They are waiting for their rides home, and sometimes they wait a very long time. Every once in a while, our staff have even had to drop a tired senior home.

On Tuesday, May 16, India Home was happy to see much needed attention being brought to the problem of dropped or missed Access-A-Rides by Scott Stringer, the New York City Comptroller. India Home’s Meera Venugopal was there, representing our seniors, as the comptroller announced an audit (click here for the report) of MTA’s Access-A-Ride program. He accused them of waste, mismanagement and service failures even as the MTA paid them $321 million in calendar year 2015. 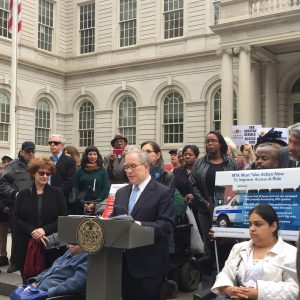 Seniors have been badly served by MTA. City Comptroller Scott Stringer announcing the audit at a press conference. India Home was there.

Take a look at the facts:

“Access-A-Ride is absolutely essential for thousands of people to get around New York City every single day, yet this program stranded thousands of people, wasted millions of taxpayer dollars and caused untold harm and distress,” Stringer said in a statement. “We found serious breakdowns in oversight and operations which have contributed to a culture of indifference and neglect by the MTA. After years of mismanagement, it’s on the MTA to take action now.”