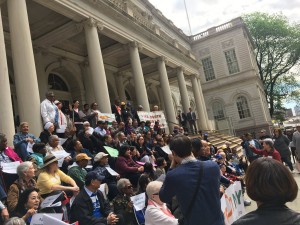 South Asian seniors, such as the one’s we serve at India Home, are among the fastest growing groups of older adults in New York City.  For example, according to a report by the Center for an Urban Future, from 2000-2010, the number of Indian seniors in NYC grew by 135%. However, in a counterintuitive move,  city funding for senior services dropped by 20 percent, going from approximately $181 million in Fiscal Year 2009 to $145 million in Fiscal Year 2012.

Mayor De Blasio’s Executive Budget for 2018 adds no new funding to Department for the Aging (DFTA), which allocates money for senior services. DFTA receives less than ½ of 1% of the city budget – and less than 2% of all human services funding, even as the share of seniors in NYC has grown to 18% of the population. It has been widely documented that immigrant seniors also have unique needs. Many have Limited English Proficiency and large numbers live under the poverty line. For example, 27 percent of Bangladeshi seniors are below poverty, while the numbers for Indian seniors stand at 15 percent and Pakistani seniors at 22 percent.

As Bobbie Sackman, Associate Executive Director of Public Policy, LiveOn NY, said: “On behalf of the 300,000 older New Yorkers served by LiveOn NY’s members, we find it deeply disturbing that Mayor Bill de Blasio, once again, has refused to add any new money to fund vital services through the Department for the Aging (DFTA).” 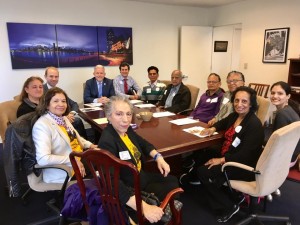 Given the situation–growing numbers of seniors and a lack of funding–India Home’s seniors felt it was even more important this year to join advocates from LiveOn NY and other senior-serving organizations to make their case directly to elected Council Members.

About 10 seniors from our Sunnyside Center and Desi Senior Center participated in Advocacy Day organized by LiveOn NY at City Hall on Wednesday, May 3, 2017. The day started with a rally on the steps of the famous building, where seniors holding India Home banners chanted, “No seniors, no budget,” along with the crowd. The fact that the budget for DFTA hadn’t increased was highlighted by various Councilmembers who spoke at the rally.

Councilman Jimmy Van Bremer who’s District includes Sunnyside, where India Home runs a center on Mondays, said, that “every year should be the year of the senior,” not just 2017. Danny Dromm, Councilman for Jackson Heights, and a longtime supporter of India Home, reiterated that “we need to be sure that seniors get their fair share of the budget.” 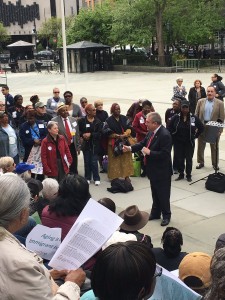 Councilman Danny Dromm speaks to the crowd on Advocacy Day 2017

Seniors and long time members of India Home’s Sunnyside Center, Usha Mehta, Bharat Patel, Dinesh Patel, Bharat Shah and Narendra Butala met with both CMs Van Bramar and Dromm and presented their demands for an additional day at the Sunnyside Center and better transportation. They urged the elected officials to approve India Home’s capital project citing the huge demand for India Home’s services and the lack of space that we are facing currently.

Seniors from India Home’s  Desi Senior Center in Jamaica,  Md. Abu Taher, Md. Mokbul Hossain, Mahbubul Latif and Mouirul Islam, met with CM Eric Ulrich’s office and CM Donovan Richards office. Desi Senior Center member, Md. Abu Taher spoke as a representative of all the seniors who couldn’t be there in person when he said: “We need more funds for Halal meals to give to people who cannot come to our center.We need more space; when we do exercise, it is very crowded.”

One of India Home’s stated missions is to create opportunities for seniors to lead and advocate for themselves. We were proud to see our members making their case with confidence with elected officials and their staff and their grasp of the important issues.