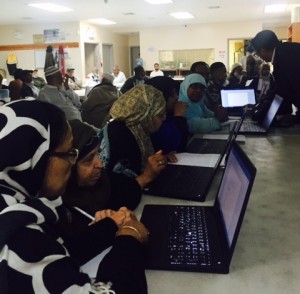 India Home’s seniors are learning computer skills, many for the first time

India Home’s Desi Senior Center is now offering computer classes to senior men and women who want to learn to handle technology. Mr. Palash Piplu, a volunteer, teaches the class on Thursdays. For now, Palash is familiarizing our seniors, many of whom  have never touched a computer, with basic computer skills, such as how to open a file and save it, or how to browse the internet.

A. Mahbubul Latif is happy that he is learning something new and wants to learn all about the computer. “I can do my own work, take care of my own things,” he said.

India Home started these classes because there is a strong desire among our seniors to get in touch with the world.  As Latif said,  “Everything is on computers now…but when I ask at home to teach me computers, nobody helps me.”

Learning the unfamiliar technology don’t come not easy for these elders, but they persist. They are determined to learn the intricacies of computer use,  even though, as Latif acknowledged, “We didn’t practice computers in our time.”

It has been heartening to see how the women at the center have been at the forefront of the classes, encouraging each other to participate.

Rabeya Khanom is 67 years old but wants to be always learning. At the beginning of the class, she said, “It was difficult to catch up,” and wished there was a “shortcut.” But she says she’s  “learning this from my own interest. It is better to be learning something than sitting at home doing nothing,” she said. She also doesn’t want to be left behind.  “Everybody has computer in our home, internet too. I want to use email and the internet,” she said.

While many of the seniors have never used a computer, several others have worked and retired in the US.  They are taking to classes to update their skills. Farida Talukdar worked for 23 years in the Social Services department in New York City and says she has a basic knowledge of computers. But now, she said, she “was getting interested in Word, Excel and the Internet. ” With the instructor Palash’s teaching, these programs, were “becoming much easier now,” she said.

It is a well known fact that students learn better with support from their families. Our adult learners are being encouraged by their children. For Ms. Khanum, there’s an additional incentive to master computers: “My daughter said if I learn computers, she will buy a computer for me,” she said, smiling from ear to ear.

Funding for the 14 unit computer lab was generously provided by Department for the Aging and Commissioner Dr. Donna Corrado.